“We have very good news”, said the tech rep over the phone.

“Great, it’s about time I got some good news regarding a computer,” I thought.  Lately it seemed like the tech gods had been conspiring against me.

“The good news is that the repair will be completely covered under the manufacturer’s warranty.  Of course due to the extensive problems, we will have to send it back to the factory.  If things go well, we expect the repair to take approximately ten business days.  With 2 days shipping each way, you should expect a call from us in about 14 business days.”

I quickly did the math in my head (since I had no computer do so), and realized that eliminating weekends, Thanksgiving and other holidays (is Black Friday a “business day”?), I might be looking at getting my computer back early in the second week of December – if all goes “well”.

Everybody recognizes that computers and other devices are a great boon to humanity – especially to someone like me.  Whereas lots of people have their entertainment, social lives, and household management (i.e., bill paying) on their computer and/or phone, many others, such as I, can run whole businesses from those little boxes – from anywhere we might be.  I don’t need anything other than my laptop and phone to handle everything in my life, both personally and professionally.

But there’s a yang to that yin, as I’ve had driven home to me over the past 18 months.  What happens when we don’t have access to those little boxes?  What happens when the phone runs out of juice, the tablet gets lost, or a lightning storm fries the computer?  Then one’s entire life might come to a screeching halt, if all goes “well”.  If all doesn’t go “well”, then maybe you’ve lost some of that life forever.

One use for a hot laptop

Crash #1:  My run of computer crashes started May 20, 2014, eleven days before CloudCalc’s promised debut.  While putting the final touches on Version 1.0, I got a message that the CPU was overheating and that I had better shut down immediately in order to avoid a complete meltdown.  I took the computer to three different repair places to get time estimates, which ranged from 10 days to three weeks – stymieing my launch plans.  So what to do, other than take an enforced vacation?

My friend Rakesh came to the rescue, offering me a loaner computer plus the services of his company’s IT guy to clone the drive from my laptop.  So before turning the machine in for repair, we spent half a day transferring everything from the laptop to the tower computer, with which I spent two days working before sending my laptop out for repair, just in case…

The “just in case” was wise, since the experience with the new machine wasn’t quite right.  Experimenting with the old one, I found that propping up the back of the computer provided better air flow, and the overheating problem wasn’t so bad, so I wouldn’t have to lose it for three critical weeks.  Sure the CPU speed would throttle back when things got too hot, but at least it ran, most of the time.

(If you are curious about the temperature of your CPU, you can download this heat monitoring program here.  My CPU, while propped up in the back, hits peak temperatures of 91oC.  Notably, this is 3 degrees hotter than the infamous McDonald’s coffee.  So it looks like I’d better keep this laptop away from my lap.)

Anyway the propped laptop was enough to get by.  After spending a few hours copying modified files back to the old laptop, I got back to work and launched CloudCalc only one day late, on June 2, 2014.

Lesson #1 to be learned – don’t let your CPU overheat.  If it does, find time to get it fixed, or get a new machine.

Only one javaws.exe — so things can still get worse!

Crash #2:  I continued using the hot box for another 16 months, since I couldn’t face the prospect of setting up a new computer or copying over my old files.  The machine periodically acted up (or actually died down) for a day or so, but then always came back to life just when I was about to throw in the towel.  But then on September 21 of this year, things went completely downhill.  The machine slowed down to a microfraction of its normal speed (one example: after pressing Ctrl-Alt-Del, Task Manager took 3-1/2 minutes to pop up!).

I spent days trying to diagnose what was going on.  I finally gave up on my 4-year old machine, and bought a new one.  From there it took three days to transfer most of the important files from the old machine to the new, plus reinstall my old programs.  The main bottleneck was the old machine – it would take me two hours to copy a folder to the external file, but then only 40 seconds to copy from there to the new machine.  Eventually I was back in business, only having lost five days of productivity!

Weeks later I discovered the problem, when I noticed there were thousands of instances of a process called javaws.exe running.  It seems that a week or so earlier I had tried to run a web-based beam calculation app.  Chrome told me that the app required Java, but then refused to let me install it, calling it a security risk.  So I tried FireFox, with the same result (refusal to install Java as a security risk).  Ultimately, Internet Explorer did let me install Java, but only after the warning “Are you really, really, really, really, sure?”

Long story made short…installation of the Java allowed some dormant malware to take over the machine, spawning thousands of instances of javaws.exe, hogging 100% of the CPU – a problem that I resolved by uninstalling Java.  (For more information on the javaws.exe problem, just search Google.)

Lesson #2 to be learned – if your computer, your software, or your browser warns you against doing something, maybe YOU SHOULDN’T DO IT.

After a day without a phone or computer, I felt like an off-the-grid, survivalist hermit

Crash #3:  At least this one didn’t involve my computer!

In the middle of the javaws.exe issue, I went out running one morning.  It was a beautiful day, without a cloud in the sky.  But if you know Houston, you know that means that a torrential rainstorm is probably just about to hit.  Sure enough it did, lasting for probably less than three minutes.  But that was enough time to drop the temperature 20 degrees, fill my running shoes with water, and wipe out my phone.  So for over a day I had neither computer nor a phone – making me a true modern-day hermit.

The Apple store was nice about it, offering me a replacement at a discount, and helping transfer my data.  Email accounts, check.  Contacts, check.  Notes, check.  Photos?  “Hey didn’t you save these on iCloud?”  Apparently not, so I lost five years of photos – vacations, college hunting, birthday celebrations, graduations, random pictures of food, two selfies, and lots of pictures of cats.  Another irritation, but one that could have been remediated by…

Lesson #3 to be learned – if something is important, make sure it is backed up somewhere!

After an inauspicious start, the Rice presentation went OK

Crash #4:  Last week I was at Rice University teaching a structural dynamics class how to use CloudCalc.  I plugged the computer (the new one I’d bought seven weeks ago) into the projector and nothing happened – the screen stayed black.  More computer problems, but at least I didn’t have to worry – I could grab anyone else’s computer to teach my class, since it runs on the cloud!  So at least I got through the session.

But the next day I once again found myself spending hours coaxing files off of the seven-week old computer to load them back onto the old, slow, hot computer.  When I took the new computer in for repairs, it turned out that both the screen and the motherboard had most likely gone bad.  (A computer failing like that after only seven weeks?  Maybe I shouldn’t name names, but I will: ASUS.)

That evening, while complaining about having to waste time transferring files for the how-many’th time, my wife asked me “Why don’t you have that stuff on the cloud?”

I started giving her excuses, such as that my development tools have to be installed on the PC, or that certain files need to be kept in certain folders in order to work right (yes, I do have backups of my most important PC files, so I wasn’t in danger of losing anything).  But then I realized that is exactly the essence of the problem – over the last 18 months, I had wasted lots and lots of time because PC software and content is so tied to a specific computer (or a specific configuration of a computer).  Whereas over that same eighteen month time span, CloudCalc – Structural Analysis in the Cloud – had been down for only two hours, one Sunday morning last spring when the host server had to be brought down for an emergency patch.  And since it is truly device independent, during that time, I and others had run CloudCalc on thousands of different machines throughout the world, without having to transfer files, install software, configure folders, or anything else.

So, now as I type this blog article on my old, slow, laptop, I have finally myself learned the lesson that I’ve been preaching for 18 months now:

Lesson #4 – Move as much of your digital life as you can to the cloud and become device independent!  That will minimize the impact of hardware crashes. 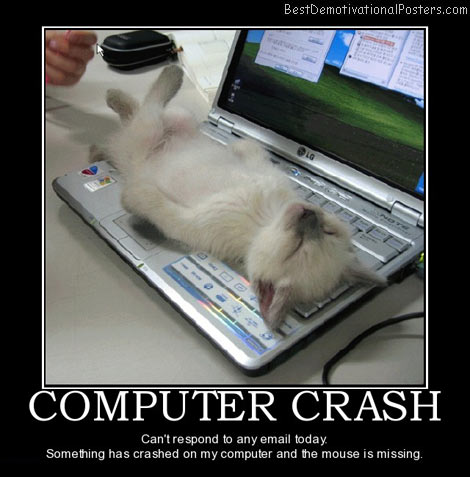 Don’t try this at home, unless you’re using the Cloud

Sorry, I’ve got to cut off this article right now.  My cat just dumped a glass of water on my computer so I’d better dry it off before things g

Worried that a computer crash might cause you to miss your project deadline?  Why not do your analysis using CloudCalc, the scalable, collaborative, and always available (from any machine you can get your hands on) cloud-based engineering software.  www.cloudcalc.com – Structural Analysis in the Cloud.

3 thoughts on “Crashing and the Cloud: Lessons Learned!”