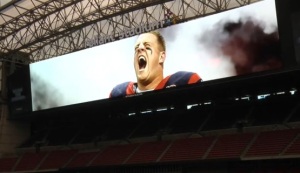 As if the real JJ wasn’t big and scary enough

This weekend the pro football season starts across America.  Sunday will find me at NRG Stadium alongside 72,000 Houston Texans fans, joining 1,000,000 others in 15 NFL stadiums across America, as well as 100 million viewers parked in front of televisions watching their favorite teams.  Today, hope is alive for every NFL fan – every team is still undefeated (late edit: except the Packers), and every fan dreams of the feats that their favorite players will use to win the Lombardi Trophy at Super Bowl XLIX in February.  I know the Texans fans are salivating over their expectations of all the times that JJ Watt and JD Clowney will combine to drive the opposing quarterback into the turf.  I hear the callers to sports talk radio swearing that Ryan Fitzpatrick (recently named by Sports Illustrated as the 5th smartest athlete in sports — so he could have been an engineer, too) will erase the memory of Matt Schaub’s pick-sixes by connecting on touchdowns to Andre Johnson.  And the entire Houston community believes that new coach Bill O’Brien (another guy smart enough to have been an engineer) will finally turn the team’s long simmering potential into real wins.

But engineers are logical thinkers.  We know that only one of 32 teams can win the Super Bowl, and thus “our” team (anyone’s team) has a 97% chance of being a loser.  So why get our hopes up with the action on the field when we know that there is virtually no chance of success?  So what’s an engineer to do for entertainment while attending a football game?  Well how about checking out that engineering wonder that we’re sitting in, the modern football stadium?

Houston has long showcased the engineering component of its football stadiums.  Rice University’s 50,000-seat stadium was built in 1950 in an amazing act of engineering, being completed by Brown & Root in a mere 9 months.  (George Brown was asked by Rice coach Jess Neely if the stadium would really be ready for the opener on Sept 30.  His answer: “Is it a day game or a night game?”  And yes it was ready, with the scoreboards installed moments before the night game started.) 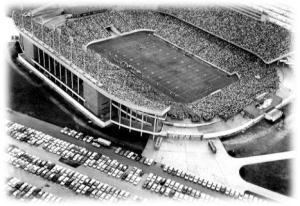 And who can forget the Astrodome, the Eighth Wonder of the World?   (Sure it is primarily thought of as a baseball stadium, but it did host the Houston Oiler football team for decades as well.)  This article describing the ground-breaking engineering required to get that stadium ready for opening night (fortunately it was a night game too) makes fascinating reading: http://www.columbia.edu/cu/gsapp/BT/DOMES/HOUSTON/h-unusua.html

The secret plans to the Astrodome

But this weekend I will be in Houston’s NRG (née Reliant) Stadium.  What noteworthy features of interest does it offer to the engineer?  Well for starters, NRG stadium was the first NFL stadium with a retractable roof and the first stadium anywhere in the US with a removable turf field, and currently boasts the largest HDTV screens in the world.  The stadium required 160,000 cubic yards of concrete, over 17,000 tons of steel and 423 tons of bolts to construct it.

So while Brian Cushing is disrupting RGIII’s offensive schemes, and Duane Brown is protecting the QB’s blind side from Brian Orakpo, the engineers in the crowd can find entertainment by checking out the roof: two panels, each 385 feet by 240 feet, supported on two parallel steel trusses, each 984 feet long with a clear span of 650 feet and a 167 foot cantilever at each end.  Each truss weighs 3,700 tons and has a depth ranging from 50 feet deep at its midpoint to 75 feet at its support points.  The roof surface itself is a translucent fabric which is attached to the panels and other structural steel using 70,000 1/2 inch bolts.

The engineering behind the HD screens, each measuring 277 feet wide and 52 feet tall and weighting over 100 tons, presented a problem in that that they were retrofitted in a stadium that had not originally been designed for them.  By placing the screens at the either end of the stadium, two problems were solved: 1) the screens blocked nobody’s view, and 2) enough remaining strength was available at that location (remember those massive trusses?) that no new structure had to be constructed (plus a third problem: how to ever get a Superbowl awarded to Houston again?).  However there were still problems associated with the retrofit – for example, the screens had to be bolted to the steel in locations of limited or no access — this problem was solved by using special “blind bolts”.

For a great description of the engineering behind NRG Stadium, go here: http://www.hirschfeld.com/sectors_structural_04_article.pdf

Who cares that Janet Jackson is down there —
we’re checking out those trusses!

Whatever NFL stadium you attend, it is certain to have some noteworthy engineering features (for example did you know that the AT&T – aka Cowboys — Stadium in Arlington, TX is considered to be the world’s largest “indoor room” without a single column?).  So when the football season inevitably descends into “Wait ‘til next year!’ mode, when the beer starts to taste flat, and when the cheerleaders lose some of their pep, take a look around you and start admiring the work of the engineers – without whom, you would probably be sitting outside in the parking lot!

Building your own football stadium?  Why not consider analyzing it with CloudCalc – Structural Analysis on the Cloud www.cloudcalc.com!