What’s better than spending time in Houston?  The only thing I can imagine would be having someone pay you to spend time in Houston…If that sounds right to you, I take pleasure in introducing you to the Surge Accelerator http://www.surgeaccelerator.com/, one organization that is looking to do just that.

Surge is a Houston-based software accelerator targeting the energy industry, Houston’s specialty.  Despite the fact that it has been in operation for a mere 3 years, it has already been named one of the top 10 accelerators in the United States by both TechCrunch http://techcrunch.com/2014/03/10/these-are-the-15-best-accelerators-in-the-u-s/ and CNN http://money.cnn.com/gallery/smallbusiness/2014/01/15/startup-accelerators/9.html.  If you are the founder of an energy related software company, Kirk Coburn of Surge is inviting you to apply now to become a member of the Spring 2015 Surge class: http://www.surgeaccelerator.com/blog/surge-accelerator-opens-application-for-surge-class-4-today.  Those selected receive a $30,000 seed investment (yes, they actually pay you to spend time in Houston!); free office space, software tools, web hosting, legal and financial services; four months of intensive mentoring by Houston’s best business/energy minds; introductions to potential partners, customers, and investors; and finally Surge Day — the chance to pitch your company to venture capitalists, energy companies, angel investors, media partners, and service providers. 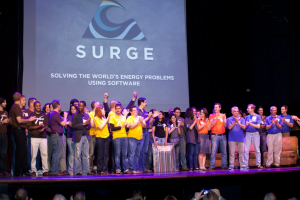 Surge Day – your chance to play the House of Blues

So why am I giving a shout out to Surge on the CloudCalc blog?  Well there are the obvious connections – Houston, software, startup, etc.  But more importantly, Surge played a major role in getting me (and CloudCalc) where we are today.

I’ve been a mentor at Surge for the past three years.  When I left my previous engineering software company I looked for something to fill my time (in between Spanish lessons, Argentinian tango, guitar, travel, art collecting, drinking wine, serving on a few advisory boards, etc.).  I heard that Surge was ramping up; I thought that I had something to offer, and so signed on as a mentor.

And I was right…I did have something to offer.  Many of the founders benefitted from the advice drawn from my nearly 30 years in the software business.  Problems that they were facing for the first time, I had encountered, worked through, and survived more than once in my career.  I was able to point out considerations such as sales channel development, marketing strategy, business planning, financial projections, and legal concerns – considerations that had taken a distant back seat to many founders’ focus on technical development.

But the funny thing was that the mentor became the mentee.  At the same time that I was passing on my knowledge to the founders, I was drinking in theirs.  I supplemented what I was learning at Surge by attending a few Y Combinator (the Silicon Valley birthplace of Dropbox, Airbnb, and Reddit) Demo Days and putting in additional time mentoring at the Houston Technology Center.  I began to study, and certainly began to “get” the beneficial aspects of the new software startup model.  The endless energy of the lean startup team, the undeviating focus on rapid product development and building a user base, the willingness to sacrifice today’s revenue for tomorrow’s market share, recognition of the rising dominance of mobile over desktop, reliance on new channels such as viral spread and social media to build the user base, and finally the dedication to the Cloud as the delivery platform of the tomorrow – no, of TODAY – was very intriguing to me.

But how about in a world where much of the technology is based on 40-year FORTRAN algorithms, a code base for which it is increasingly difficult to find developers who can maintain it?  Or a world where the customers have long complained about the difficulties in collaboration faced by a distributed workforce (office, site, offshore, etc.) due to the siloed nature of a PC-bound tool?  Or a world where portability is restricted, limiting the ability of site engineers to make money-saving, on-the-spot decisions?  Or a world where software updates may take years to be released, and then additional years to be rolled out through the clients’ organizations?  Or a world where it is predicted that 50% of the work force will retire in the next few years, to be replaced by a younger generation raised on – and expecting — cloud, portability, collaboration, and frequent (and automatic) updates?  Or a world where many customers are held hostage by the “take-it-or-leave-it” annual renewal contract offers?  Hmmm…maybe this could be fun.

And thus CloudCalc was born – inspired by the young entrepreneurs of Surge, Y Combinator, and the Houston Technology Center.  CloudCalc – a totally ground up (or should I say “cloud-down”) reimagining of the engineering software prototype.  Can an old dog (me) learn new tricks?  Can an older dog (engineering software) learn new tricks?  Why not judge for yourself, by registering at www.cloudcalc.com – Structural Analysis on the Cloud.