This week, on March 17, there will be millions of revelers worldwide, dressed in green and drinking Guinness.  What could they be celebrating?  The conversion of Ireland to Christianity?  If so, they would be 1500 years too late.  The ridding of a distant island of snakes?  That couldn’t be of interest to anyone (other than an ophidiophobe).  A heritage that is claimed by as many as 80,000,000 people throughout the globe?  Maybe, but remember – there are over six billion who do not claim that heritage.  But if we approach a crowd of celebrants at random, it’s possible that we just might overhear them singing:

Yes – just as we suspected, all of those partiers will be toasting Saint Patrick, the patron saint of engineers!

Many people know the basics of the Saint Patrick story: a Romanized Briton living in the 5th century AD, the teenage Patrick was captured by pirates and taken to Ireland where he was sold into slavery.  Five years later, inspired by a vision of God, he escaped and returned to his original home.  From that point on he devoted his life to the study and teaching of Christianity, returning to Ireland with the intended purpose of converting the pagans.  Although little hard fact is known about Patrick (what little we do know has been gleaned from his only two surviving writings: Confessio and Epistola ad Coroticum) a number of legends have been ascribed to him.  One of these is that Patrick famously used the shamrock as a symbol to teach the concept of the Trinity, another is that he used his shillelagh to drive all snakes from Ireland – as punishment for their having attacked him during a fast.

But these are not the legends that interest us, or any of the other Saint Patrick’s Day revelers that WE know.  What we want to know is exactly how did he become the patron saint of engineers?

One of the few things that we do know about Patrick is that he, in order to provide places for his converts to worship, became a builder of churches — including the first Irish church at Saul County Down, as well as the Episcopal See at Armagh.  Patrick, who had been educated in a Romanized culture, had an understanding of “modern” engineering techniques such as lime mortar and the arch, and so introduced them to Ireland.  Prior to the arrival of Patrick, the Irish built their stone structures using dry masonry techniques, with closure of the walls attained by gradually overlapping the flat-lying wall stones.  Thus was Saint Patrick’s engineering pedigree established, and for this he is revered within the Catholic Church as the patron saint of engineers. 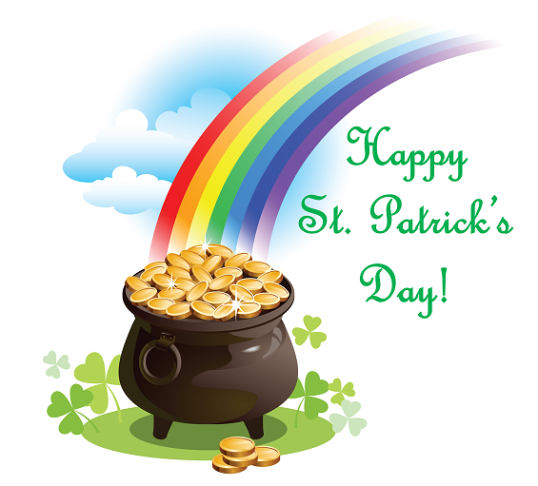 A rainbow leading to the leprechaun’s gold, or just one of Saint Patrick’s famous arches?

The celebration of Saint Patrick the engineer became more firmly entrenched in 1903, when a number of engineering students at the University of Missouri – Columbia decided that they needed a break from their difficult studies.  One of the students “discovered” that Saint Patrick had been an engineer, and convinced his fellow students that honoring the saint provided a valid excuse for skipping classes on March 17.  And so a tradition was born.  The next year, a “resurrected” Saint Patrick himself appeared on campus to knight the celebrating class-cutters, inducting them into a newly founded organization, the Knights of Saint Patrick.

Since 1903, the March 17 engineering celebration has grown, and spread (with chapters of the Knights of Saint Patrick now on the campuses of many other engineering schools in the United States).  Today, at the University of Missouri, Saint Patrick’s Day has expanded into a full length Engineering Week, featuring contests, parties, singing of the Missouri Engineers’ Song (quoted in the second paragraph above), engineering open houses and guest lectures, charity work, engineering-style pranking, and finally a ceremony in which selected students are inducted into the ranks of the Knights of Saint Patrick.

Souvenir from a past Engineering Week at University of Wisconsin

The influence of Saint Patrick also lives on through the contribution of the Irish to engineering history – a contribution that is outsized considering the nation’s relatively small population.  Not surprisingly, in view of the Irish diaspora, many of the benefits of Irish engineering has accrued to areas outside of Ireland itself.  For example, Christopher Colles (1739–1816), the first of many exceptional Irish-American engineers, was the visionary behind the Erie Canal in upstate New York.  Robert Mallet (1810-1881), considered to be the father of seismology, did much of his groundbreaking work in Italy.  John Coghlan (1824-1890) gave his name to an area of Buenos Aires, in recognition of his contributions to the harbor, railway, and other public works in that city.  Charles Dickinson West (1847-1908) was immortalized in bronze at Tokyo University in honor of his years spent as a professor of engineering in Japan.  Maurice Fitzmaurice (1861-1924) built dams, docks, and railways in all parts of the globe, and was even knighted by the Ottoman Sultan for his work on an earlier version of today’s Aswan Dam in Egypt.  More recently, Peter Rice (1935-1992) – once called “the James Joyce of structural engineering” — gained fame for his engineering design of such modern-day landmarks as the Sydney Opera House, the Pompidou Centre, and the Louvre Pyramid.

The Sydney Opera House in green — for its Irish engineer?

So Happy Saint Patrick’s Day to all!  This March 17, don’t forget to lift both your Harp Lager — in a toast to engineering, and your voice – in the Missouri Engineers’ Song, as you celebrate Saint Patrick, the patron saint of engineers.

This week may all of your structural elements be GREEN (which means they PASS CloudCalc’s AISC Code Compliance Check)!  Celebrate Saint Patrick’s Engineering Week by signing up with CloudCalc, the scalable, collaborative, cloud-based structural engineering software.  www.cloudcalc.com – Structural Analysis in the Cloud.