“What am I going to do, now that I’ve designed the Super Bowl stadium?  I’m going to Disney World!”

“I’m going to Disney World!”  We all know that is the destination of choice for Super Bowl winning quarterbacks, but earlier this month, it also became the destination for many of the 4,000+ structural steel professionals that attended the AISC’s National Association of Steel Construction Conference (NASCC 2016 – The Steel Show) in the Orlando, FL area.

Sure there was plenty to keep structural engineers’ interest at the conference itself, including the hundreds of exhibitors, the array of technical presentations (including CloudCalc’s presentation), and last but not least, the gorgeous structural steel supporting the St. Augustine Dome of the host Gaylord Palms Resort.  But I’m sure that many of the attendees made it their business to get away from the conference and indulge some fantasy at the Magic Kingdom, a few miles to the north. 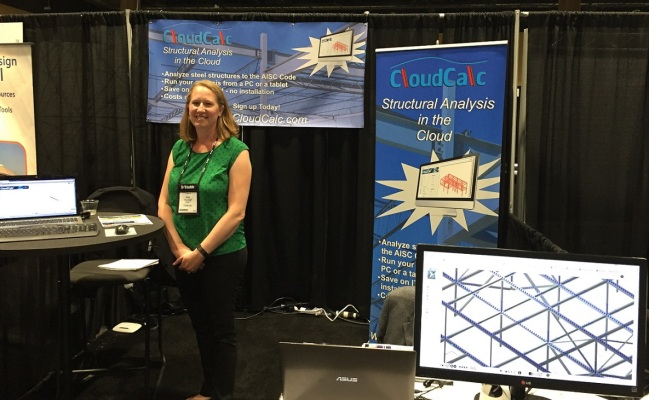 CloudCalc booth, moments before the rush — thanks to all who visited!

Of course Disney World is known as an attraction for the kids (I took all three of my kids there as a “reward” for having passed kindergarten), but I believe its magic also has a lot to offer more mature dreamers and creatives – in other words, exactly the types found in abundance at an engineering conference.

I have the pleasure of being old enough to have visited the original Disneyland in Los Angeles just a few years after its debut.  My outstanding memory of that visit?  It was the sheer terror of being seated in a mining tram in the Snow White ride, just below a mountain top where the Evil Witch was poised to roll a boulder on the passers-by, myself included!  I often attribute my decision to become a structural engineer to that moment, when my mind desperately searched for a way to support that rock and keep it from falling (a search that continued in my nightmares for years to come)! 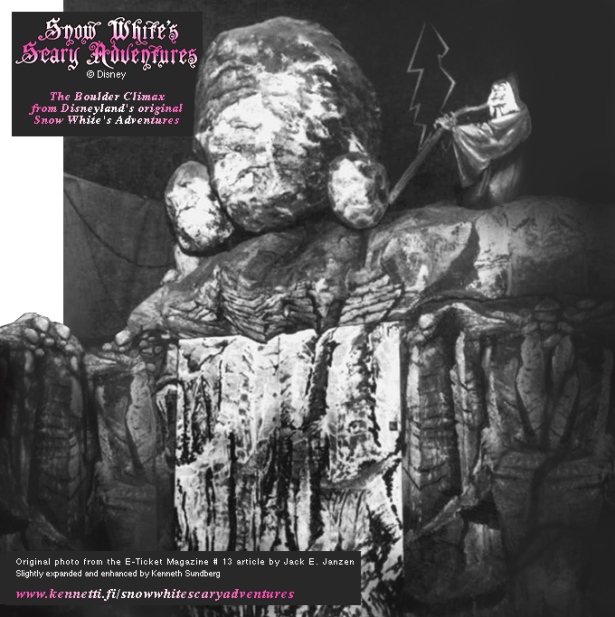 The Evil Witch and the boulder — an inspiration for generations of structural engineers?

Years later, on my way back from a college spring break in Fort Lauderdale, I visited Disney World in Florida, again just a few years after its opening.  By then I was old enough to fearlessly face the Snow White ride, so that is not my greatest memory of that visit!  (By the way, I think many others must have been traumatized by that ride, because in 1994 Snow White was put through a major renovation which converted it into a more family-friendly, less scary experience.  Maybe the removal of that Witch/boulder scene is responsible for the decline in structural engineering enrollments in American universities over the past 20+ years?)

So what is my predominant memory from my first visit to Disney World?  To tell the truth, it was the realization that the most advanced technology in the world resided not in the space program, nor in the computer industry, nor in the Department of Defense, nor in telecommunications, nor in the leading technical universities (I was studying at MIT at the time) but was concentrated in a forty square mile area outside of Orlando, Florida.   Today, cutting edge technology plays out across the web every day.  In 1976, our technical playground – our internet, our Silicon Valley so to speak – replete with haunted houses, animatronic Tikis, holographic poisoned apples, and pirate fleet battles, was found in a vacation resort.  What made Disney World the center of the technological world?  Why did it seem that while other industries were creating incremental improvement on technology that had been in place forever, Disney was defying both budgets and the laws of physics to bring us whatever could be dreamt?

What supports these ghosts in thin air?  The last resort of the structural engineer: Magic!

This was made possible due to the fact that the Disney Corporation valued engineers, most specifically creative engineers.  From early on a company – stocked with engineers and other dreamers — was created to imagine/design/build the theme parks.  The charge to this company (which later was incorporated as the Imagineering Division of Disney) was never to implement the most economic, reliable, watered-down version an amusement park executive’s limited vision, but rather to do everything internally, from top down, and without limitations.  So that meant starting with a dream, a dream as outlandish and impossible as one could dream, and then working backwards to discover whatever technology was needed to eventually make that dream come true.  It is not surprising that the Imagineers hold over a hundred patents, with significant innovations in the areas of robotics, 360o projection, holograms, fiber optics, interactive technology, drones, etc.  Of course not every engineer gets to work on the cool, revolutionary technology – at an attraction that sweats the details, some of the work would have to be more mundane: while in Orlando I met one former Disney structural engineer, who told me he had spent much of his time there working on creating artificial wood that “looked more real than real wood”.

Engineering innovation wasn’t just restricted to the theme park per se.  You may be aware of the boom in modular construction these days, such as this 57-story building constructed in China in 19 days.  But did you know that Disney World pioneered that area, too?  In Disney World, even the hotels had to be the most advanced in the world, and for that a modular design was devised, in collaboration between Disney engineering and the US Steel Corporation.  The Contemporary Hotel – chosen to be the futuristic showpiece — was constructed as a steel A-frame rack.  Three miles away, each individual room was fabricated, furnished, finished off with a Gideon’s bible in the dresser drawer and a mint on the pillow, and then shipped to the hotel site where it was set in place by a crane.  In true Disney fashion, the dream was that whenever rooms needed refurbishing they could simply be popped out of their spot on the frame and taken back to the original staging area to be redone.  But the sad reality was that the laws of engineering – which maybe could be suspended inside the Magic Kingdom world of Tinker Bell and Peter Pan – still applied in the “real world” where the hotels were located.  The deflections of the structure under the cumulative weight of the hotel rooms exceeded expectations, making it impossible to extract the modular rooms once inserted.  Well maybe not every dream comes true at Disney World.

It’s been a few years since Disney World stood alone on the peak of high tech innovation.  Most of what they do is still creative, fun, and innovative; it’s just that we have become jaded by the technological advancement that we see every day everywhere else.  But it is still nice to get to Orlando once in a while, it is then that I can re-live my first encounter with that time and place when engineering truly did make dreams come true. 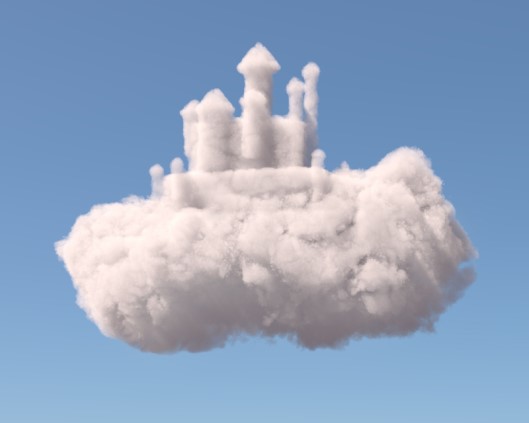 Want to build your own Magic Kingdom in the clouds?  Why not use the cloud?  CloudCalc, the scalable, collaborative, cloud-based structural engineering software.  www.cloudcalc.com – Structural Analysis in the Cloud.