Let’s calculate the force required to lift those steins…Fluid dynamics, anyone?

Earlier this month I continued my travels in search of engineering topics by visiting Munich during Oktoberfest.  I went to Munich with my wife and friends, intent on seeing all the sights that would intrigue any engineer: the Deutsches Museum (the world’s largest museum dedicated to engineering, science, and technology), the Glockenspiel in the Rathaus (a wonder of mechanical engineering), and maybe the Allianz Arena – home of Bayern München and one of the prettiest football stadiums anywhere.  I was sure that I would find many topics for a blog article on this trip.

But it seemed like every time I started out to see something on my list, somebody popped a beer stein in my hand, distracting me from my goal.  It’s funny how that works, especially in Munich, especially in October.

As an engineer, the first thing I usually notice when arriving in a new place is the structure of the airport.  The airport is a good place to show off the engineering pride and abilities of a nation, and the Munich Airport did not disappoint.  A 19,000 square meter outdoor atrium, designed by Arup Group, connects the terminal buildings.  The membrane roof is supported by “banana beams”, suspended from masts.

Truly an impressive structural display, and something that I wanted to spend more time examining, but somebody mentioned “beer”, so we quickly left the airport and headed into town.  I’m sure there will be lots of time later in life to get back to the Munich Airport. 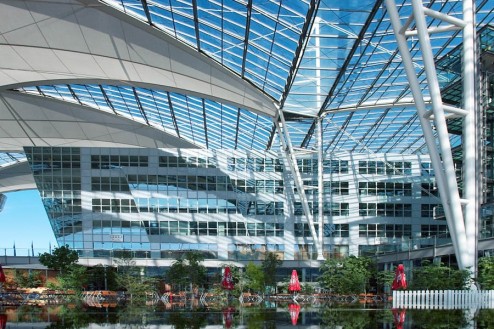 After checking into the hotel, the first stop would be the Glockenspiel, which was fortunately on the way to the shopping area specializing in lederhosen (the official garb of Oktoberfest).  The Glockenspiel, mounted in the tower of the Rathaus, is a complex mechanical device consisting of 43 bells and 32 life-sized figures.  Periodically, according to schedule, the mechanical wonder kicks into action.  As music plays, the figures on the two levels of the device act out two stories from the 16th century – first the marriage of Wilhelm V, the Duke of Bavaria and then the “Dance of the Coopers”, a show of loyalty given by the populace to the Duke during a breakout of the plague in 1517.

We joined the large group of tourists waiting to witness this precision engineering in action, and waited…and waited.  Why the delay?  Was the schedule wrong?  Was there an engineering glitch?  Had the 32 figures gone out for a beer?  Hmmm…yes, beer.  Inside the Rathaus there was a café offering cold beer.  There would be time enough to check out the Glockenspiel some other time. 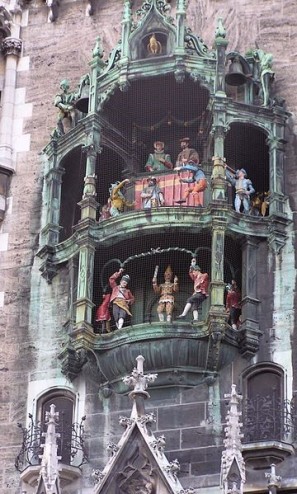 The Glockenspiel — Engineering takes a day off

Later, it was on to shopping for lederhosen — the outfit worn by Ricola’s Alphorn players and most of the attendees of Oktoberfest.  Checking off, from top to bottom: hat (with feather), wool jacket, checkered shirt, beer belly, leather shorts (whoever thought this was a good idea?), knee socks, and clunky shoes, all held up by a set of suspenders (braces to my British readers).  For a moment I thought about writing an article calculating the stress on the suspenders as they hold up the shorts, but the store clerk told me that the suspenders were no longer in style, with a belt being preferred “this season”.  So I realized that would not be a very helpful article for my readers, as engineers do tend to follow the very latest fashion. 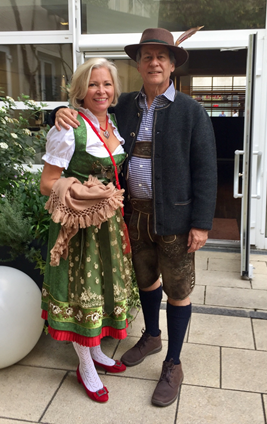 Models attired in the pinnacle of Oktoberfest garb

So next on to the Deutsches Museum, the largest museum in Munich.  Founded in 1903 by Oskar von Miller in order to show the importance that engineering plays in German society, it displays 28,000 items in 50 areas of technology, including power generation, shipbuilding, aircraft, and others.  Certainly there would be an interesting blog topic there, but…unfortunately along the way, a beer called out our names, and the visit to the museum got postponed.

The next day, still without a topic, it was on to the Oktoberfest itself.  For those who have not been there, it is like a state fair – carnival rides and deep fried food – awash in beer, lots of beer.  According to the official stats, 7.7 million liters of beer were consumed during the three weeks of the celebration.  That is the equivalent to the contents of more than three Olympic-sized pools.

(Speaking of the Olympics, while shopping for Oktoberfest outfits we encountered Usain Bolt, a regular at the Oktoberfest celebration.  I tried to show him my postings on the engineering of marathon running, but he didn’t seem very interested – maybe because he has retired from running?  Any way if you would like to see what he missed, please check out 26.2: The Engineering of Marathon Running as well as its sequel, 90 Steps per Minute: Structural Dynamics of Marathon Running.)

After going on some rides (have you ever tried to ride a Wild Mouse without spilling your beer?) and witnessing a form of Bavarian sadism called Teufelsrad (Devil’s Wheel) it was on to the main attraction: drinking beer.

To do that, the attendees cram themselves into one of the many beer tents.  Those with more stamina race for the first-come, first-served tables, and stand on the benches drinking beer and singing along with the band, for hours, until they can stand no more, and somebody else grabs their place.  Those with more…sense…reserve a seat at a table in advance and can relax a bit as they drink beer for five hours.

There are 14 beer tents at Oktoberfest, each offering different amenities.  One has an ISO 9001 certificate, another has a crossbow shooting range.  We were seated in one of the smaller of the tents — the Schützen-Festzelt, which seats 6,500 people, serves Löwenbräu beer, and offers an actual (gun) shooting range in the back, a perfect activity for when you can no longer down any beer.

6500 drinkers inside Schuetzen-Festzelt — Don’t all shoot at once!

Looking around the tent, I realized this might give me my topic.  Each of these “tents” are actually temporary buildings, constructed, disassembled, and reconstructed year after year, for decades.  Yes they may have membrane roofs and sides (like a tent), but in reality they are very specialized, sophisticated structures.

So it became my goal to find out what went into the engineering of these “tents”.  Unfortunately I didn’t find out much, but what I did find out was really cool:  it turns out that in 2015, the student project in Prof. Dr.-Ing. Frank Petzold’s BIM course at the Technical University of Munich was to design a new beer tent!  Students were broken into teams consisting of one structural engineering student, one architecture student, and one student from the “Energy and Sustainable Building” curriculum.  The three disciplines had to work together to share data via BIM, and had to analyze the load-bearing structure as well the topics of heat protection and patron comfort.

One team’s design for a Beer Tent made of umbrellas — to prevent rain from watering your beer?

In my days as an undergraduate at MIT, the best I ever got to design was an offshore oil platform.  Oh, to be a student again!  For further information on the TUM beer tent student project, you can click here.

PS — After finally getting our fill of beer on Saturday night, I’m happy to report that we finally did make it to the Deutsches Museum for a short time on Sunday.  It was there that I found my first interesting piece of structural steel since the airport: the supporting structure of a zeppelin’s nose!

All in all, it was a great trip, with enough activities omitted or postponed to make me want to go back for more!  Oktoberfest is a great destination for engineers…or engineers who like beer…or anyone who likes beer.

Doing some engineering work this Oktober?  Why not use CloudCalc, which is scalable enough to analyze anything from a zeppelin nose to the largest beer tent.  Or maybe you might just want to relax and have a beer first, or two.  But when you’re ready, remember CloudCalc, the collaborative, cloud-based structural engineering software.  www.cloudcalc.com – Structural Analysis in the Cloud.

2 thoughts on “An Engineer’s Guide to Oktoberfest”