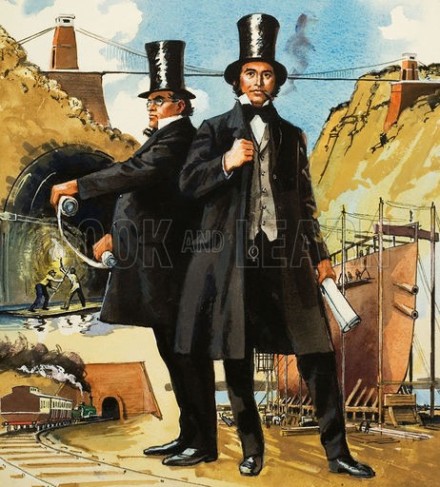 I’d like to wish “Happy Father’s Day” to all of my readers who qualify (and if you don’t qualify, please pass these wishes on to your father).  Today presents a great opportunity to think about the many famous father-child combinations throughout history: Philip of Macedon and Alexander the Great; Eric the Red and Leif Ericson; Genghis and Ögedei Khan; Alexandre Dumas, père et fils; Muhammad and Laila Ali, George H. W. and George W. Bush; Billy Ray and Miley Cyrus…

But who would be the greatest father-child pair in the history of engineering?  I would like to nominate Marc and Isambard Kingdom Brunel!  If you are unaware of the accomplishments of this father-son combination, read on.  (Or, if you would like to read about another famous father-son – and daughter-in-law – combination in engineering, I invite you to check out “The Roeblings:  An Engineering Family, and the Cable that Connected America”.)

Marc Isambard Brunel, the father, made his engineering mark in two countries.  Born in France in 1769, Brunel showed talent early on in mathematics and drawing, skills that predicted an engineering future.  At age 17 he joined the French Navy — while serving, the French Revolution broke out, and Brunel — who found found himself on the wrong side of politics — decided it would be in his best interest to flee the country.

At that time, the best opportunity for a hardworking, ambitious, and talented immigrant was the United States, and that is where Brunel went.  He quickly became involved in engineering projects in the developing nation – projects such as an abortive canal between the Hudson River and Lake Champlain, as well as a proposal for the design of the US Capitol in Washington, DC.  After gaining his citizenship in 1796, Brunel was named Chief Engineer of New York City, a position in which he designed much infrastructure of the city.

But other opportunity knocked…and Brunel did not stay long in his new nomeland.  In 1798 he learned that the British Navy was having problems sourcing the 100,000 pulley blocks it needed annually for its ships.  Brunel (combining his engineering and naval backgrounds) designed a machine that could mass produce pulley blocks ten times as fast as the previous manual methods, and headed to England to make his fortune.

Brunel’s fortunes rose and fell in his new home.  His factories were eventually producing 130,000 pulley blocks per year, plus he was instrumental in automating the saw mill and boot making industries as well.  However all of his ventures were not economic successes, and so he found himself spending 88 days in debtor’s prison in 1821.

After leaving debtor’s prison, Brunel’s career took an upturn — he was hired to construct a tunnel under the River Thames, a project that had been attempted unsuccessfully 15 years earlier.  Brunel invented new technology – patenting an innovative tunneling shield – that led to a successful outcome this time.  Finally completed in 1843, the Thames Tunnel became Brunel the father’s most famed accomplishment – (it attracted 1,000,000 visitors within its first 15 weeks of operation).  The tunnel, which is still in use today as part of the London Underground, even secured Brunel — a French/American transplant — a British knighthood.

Isambard Kingdom Brunel, born in 1806 may be one of the top candidates for the title of “Greatest Engineer in History”.  How great was he?  He was voted #2 on the BBC’s list of the 100 Greatest Britons (ahead of such luminaries as William Shakespeare, Sir Isaac Newton, and Guy Fawkes).  He was the subject of an Oscar-winning film, the 1975 animated short Great (and if any of you have ever searched for films featuring civil/structural engineers, you know how rare an accomplishment this is!).  His face has appeared on coins and numerous stamps.  And what’s more, he has even been featured in a Sting song.  How great is that?

The Brunel 2-pound coin, with his Paddington Station on the reverse

Isambard Kingdom Brunel is recognized as the creator of the modern transportation industry, and one of the key figures of the industrial revolution.  In his position as Chief Engineer of the Great Western Railway (a railway linking London with Bristol and Exeter), Brunel devised many of the standards for modern railway engineering.  Likewise he designed and built numerous bridges, tunnels, and viaducts – including many that were the longest in the world at the time (his most famous work, the Clifton Suspension Bridge, spanned 702 feet).  The expansion of the railway system throughout England modernized the nation’s transportation system, enabling the Industrial Revolution.

Clifton Suspension Bridge, once the longest span in the world

Brunel was not content with just making it possible to travel from London to Exeter on a single ticket – his ultimate goal was to provide a single transportation link from London to New York.  To this end, he devised the Great Western Steamship Company, which picked up where the railway ended.  Brunel designed the ships himself – powered by steam, rather than wind; constructed of metal rather than wood; and driven by a propeller rather than a paddle wheel – these were the first modern ocean-going vessels.  Brunel’s largest steamship, the Great Eastern, launched in 1859, was capable of carrying 4,000 passengers in luxury from London to Sydney and back, without refueling.  (In an ironic twist, Brunel not only played a major part in the Industrial Revolution, but in the Communications Era, as the Great Eastern was later repurposed for laying the first transatlantic telegraph cable, which linked Europe with America.) 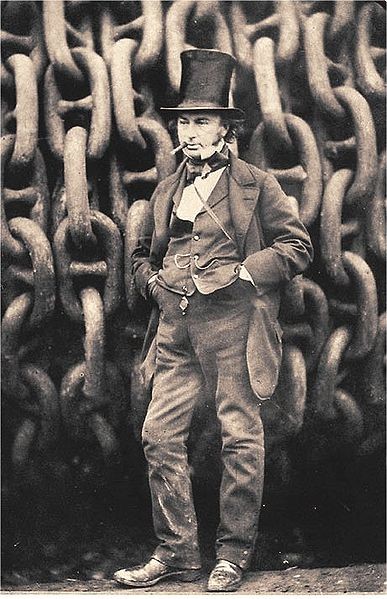 Isambard Kingdom Brunel, posing in front of the launching chains of the Great Eastern

Brunel the father and Brunel the son – they were two great engineers, linked by blood, but also by passion.  Marc Brunel understood his role as a father, his responsibility to pass on that passion to his son.  The father personally served as the son’s teacher, instructing him in drawing, Euclidian geometry, and basic engineering principles – all by the age of eight!  He ensured that Isambard studied at top schools in France (University of Caen and Lycée Henri IV) and even arranged an apprenticeship for him with a pre-eminent Swiss watchmaker (a common plan of study for engineers in pre-industrial Europe).  Upon the son’s completion of his apprenticeship at the age of 16, the father provided him with one more opportunity – he hired him on as an assistant engineer, giving him an up-close view, working on one of the most innovative projects of the era, for one of the greatest engineers of the era.

And thus did Marc Brunel fulfil his duty as a father, providing guidance to his son Isambard.  And how did Isambard pay it forward?  His son, Henry Marc Brunel, also became a prominent civil engineer!

Do you need to make your father a gift for Father’s Day?  Maybe you should design it using CloudCalc — the collaborative, scalable, cloud-based structural engineering software.  www.cloudcalc.com – Structural Analysis in the Cloud.