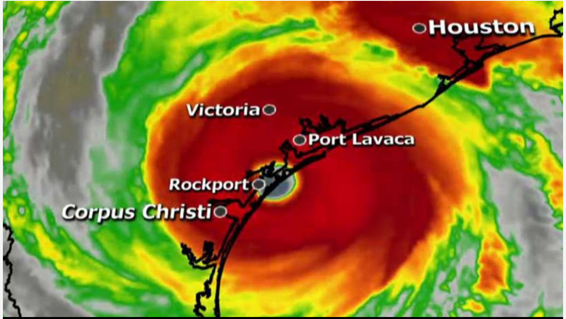 Hurricane Harvey, the most powerful hurricane to hit the US in a decade

I’m writing this article while “hunkered down” against Hurricane Harvey, the most powerful hurricane to make landfall in the United States since Hurricane Wilma nearly 12 years ago.  Harvey came ashore two nights ago as a Category 4 hurricane (indicating minimum sustained wind velocity of 130 mph) and continues to punish our area with torrential downpours.  My neighborhood has had 16 inches of rain over the past 24 hours, something that is expected to continue over the next several days.  I also periodically am losing power, and so have to resort to the old-school instruments of pencil, paper, and candle while writing this.

What can I expect t from a Category 4 hurricane?  According to the National Hurricane Center, “catastrophic damage” will occur:

Well-built framed homes can sustain severe damage with loss of most of the roof structure and/or some exterior walls. Most trees will be snapped or uprooted and power poles downed. Fallen trees and power poles will isolate residential areas. Power outages will last weeks to possibly months. Most of the area will be uninhabitable for weeks or months.

That sounds scary!  But even if nothing catastrophic happens, I may be home-bound for several days while I wait out the storm.  That will give me ample time to think about hurricanes.  Of course, being an engineer, some of my first thoughts gravitate to the structural implications of a home hit by a major hurricane, and how it might best be protected.

But even before that, I had another thought.  Harvey?  What kind of name is that for a hurricane?  When anybody (at least anybody over 60 years old) hears the name “Harvey”, this is probably what springs to mind: 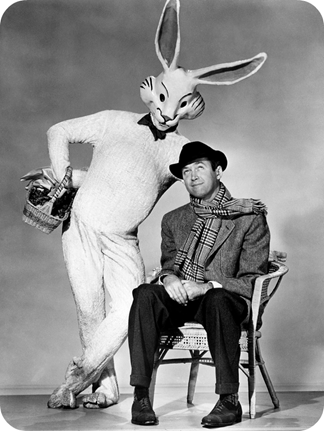 Another Harvey — scary, yes, but not in a meteorological way

So how do these hurricanes get their names anyway?  Why don’t the Category 5 hurricanes all have names like “Cruella” and “Xena”, while those that peter out before even hitting land get names like “Percy”?

It turns out that the first person to come up with the idea of naming storms after people was Clement Wragge, an English/Australian meteorologist (and later, a spiritualist who associated with Sir Arthur Conan Doyle and was converted to Islam by the Mahdi himself).  In the 1890s he began naming Pacific storms after politicians and characters from mythology.

Clement Wragge, the “colorful” father of the hurricane naming system

This practice of naming hurricanes, became popular among army and air force meteorologists during World War II, and was adopted officially — using women’s names only – by the United States in 1953.  In 1979, men finally achieved gender equality when it was decided to alternate male and female names.

Today the World Meteorological Organization, controls the naming of the hurricanes.  They maintain lists of 21 alphabetical names which are alternated through a six-year cycle.  The same names are used over and over…unless a hurricane has such a destructive impact, that the name is retired forever in deference to the suffering that it caused.  Katrina, Rita, Wilma, Ike, Irene, and Sandy are among the 20 names retired and replaced over the last dozen years.  Something tells me that Harvey will be joining that list as well!

Anyway, back to the engineering side of things…

Up to this point, the majority of my knowledge of residential wind design came from childhood readings of “The Three Little Pigs”: in other words, don’t build your house out of straw!

A case of poor design against wind

Design criteria for wind loading are governed in this country by the American Society of Civil Engineers and the Structural Engineering Institute in the Standard ASCE/SEI ASCE-7 Minimum Design Loads For Buildings and Other Structures.  Generally there are two types of loading that are of concern when evaluating wind loads – the lateral wind loading, which can shear a house off of its foundation, and the uplift force, which can rip the roof off of a building.  The lateral loads are typically resisted by shear walls transferring the forces into the foundation, while the uplift forces are usually transferred from the roof to the wall framing via tension straps.

So what types of load can a house (my house) expect to experience when subjected to 130 mph winds?  ASCE-7 defines the equations for calculating amplification factors based on gust factors, building shape, usage factor, and surrounding terrain type, but the basic wind-to-pressure calculation derives directly from elementary physics.  Bernoulli’s equation states that the pressure that develops from bringing a fluid flow (wind) to a halt is calculated as*:

(* Please excuse any calculational errors made here.  I haven’t worked with a pencil, paper, and candle in a long time.)

(Note that you will often see this equation simplified to P = 0.00256 V2, where V is expressed as miles per hour.)

I estimate that the front of my house has approximately 2500 square feet of exposed area, so that means that it would have felt over 100,000 pounds of total load under Harvey’s maximum wind speed!  More exact calculations, can be done by following the ASCE/SEI 7 Standard.  There are a number of wind load calculators, such as this one from SteelTOOLS, available online.  For example, using the calculator provided by the Single Ply Roofing Industry, I see that the design loads for my house are actually closer to 33 lb/ft2 laterally, and 54 lb/ft2 of uplift on the roof – that is certainly one Big, Bad Wolf!

So what could I have done to prepare the house to resist loads of this magnitude?  Dr. Rima Taher, Professor of Architecture of at New Jersey Institute of Technology, researched this topic in the context of construction in Haiti’s hurricane prone areas.  Some of her suggestions for making a building more hurricane proof are:

The last point reminds me that wind is not the only threat that a hurricane brings.  Fortunately the worst of Harvey’s wind has passed but much danger still remains – as the storm stalls in the area, we are expected receive up to 60 inches of rain, with commensurate catastrophic flooding, over the next several days.

So what is the structural impact that I can expect from flooding?  For that analysis I turned to the FEMA’s Sample Calculations for a Single-Story House Subjected to Flood.  Basically I have to calculate the buoyancy forces trying to lift the house.  If I take a worst case analysis – i., e., very little of the rain runs off – I can expect the house to be five feet deep in water:

So this equates to a buoyancy uplift of more than 1,000,000 lbs!  Yikes, it’s time to start calculating the strength of my house’s structure.  Except that I’ve run out of paper, worn down the point of my pencil, and almost burned through my candle…

Houston under the flood waters, the second danger of hurricanes

PS – The thoughts of all of us at CloudCalc go out to those who are suffering in the area affected by Hurricane Harvey.  It is times like this that we are reminded of how little control we have over wind, water and other forces of nature.  May everybody weather this storm and get back on their feet soon!  If any readers of this blog would like to help the victims of this disaster, please consider donating to the Red Cross’s Harvey Relief.

Do you need to build a structure to stand up to the Big, Bad Wolf, or even a Category 4 hurricane?  Why not design it using CloudCalc — the collaborative, scalable, cloud-based structural engineering software.  www.cloudcalc.com – Structural Analysis in the Cloud.

2 thoughts on “Structure Against the Storm: Notes from Hurricane Harvey”